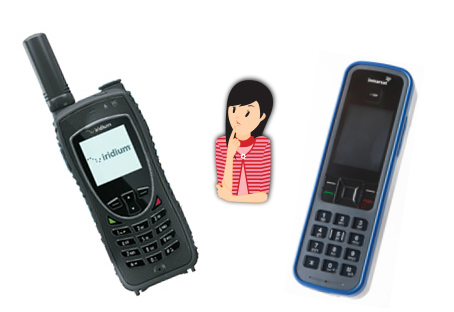 You’re in the market for a hand held satellite telephone?  You have choices, not many, but choices nonetheless.  Your mission, should you decide to accept it, is to stay within the same species of “fruit” when comparing your options… apples with apples, oranges with oranges, etc., easier said than done I know.

Your sales agent will ask you where you’re going to be traveling, where you will be using the phone?  Tell him or her that you don’t know where you are going, that you want it to work everywhere, well, virtually everywhere.  (In order for any satellite telephone to operate, hand held or not, the antenna has to have “clear line of sight” to the satellite.  There will be places where this isn’t realistic but more on that later.)  By establishing that you want the phone to be able to work anywhere on the planet you have just eliminated a couple of “regional” satellite constellations, leaving you now with two choices, the Iridium 9575 and the IsatPhone Pro.

You have the near schizophrenic rate structure policies of Iridium compared with the “not quite but almost as” schizophrenic Inmarsat rate plans.  (I swear, you would think that neither of these companies had spoken with an actual customer in years.)  You can take some comfort in knowing that virtually every satellite constellation is fixated on making their usage plans just as convoluted as they possibly can, and they’ve succeeded brilliantly!  A good sales rep can help you navigate this mine field though.

Here’s a look one at a time:

A canopy of 66 LEO satellites means that there should almost always be one overhead, making for easy connectivity.  It also means that during the course of your conversation the earth is rotating out from under the bird that you’re using, necessitating “passing you off” to the next satellite moving into range.  That can cause “dropped calls”, not always but it can.  Latency, the time it takes for the listener to hear what you said after you stop talking, is negligible with LEO satellites.

The fact that at 15 + years old the satellites are nearing the end of their useful life, well, only you know your tolerance for gambling.  For a couple of reasons, one being the shorter distance traveled to the satellite, the 9575 initializes quicker and will get you “on the phone” making calls faster.  No Bluetooth compatibility with the 9575.

Once you lock on to one of Inmarsat’s (3) HEO geosynchronous satellites you will not need to be “passed off” to another bird, minimizing the chance of dropped calls.  However, if you get your head between the antenna and the satellite you can drop the call anyway so just keep the antenna pointing straight up and you’ll be fine.

The fact that all (3) satellites are located high above the equator means that it might be more difficult to “see” the satellite, especially at extreme Northern and extreme Southern latitudes where the curvature of the earth can block the signal.  (See “clear line of sight” comment earlier). This should be a non-issue from everywhere else on the planet.

The IsatPhone Pro is Bluetooth compatible and GPS capable.  Handhelds are often carried just for emergencies so I don’t have to tell you how important it could be to be able to text your GPS coordinates to someone should the need arise. You will experience a bit more latency than with the 9575 but nothing you won’t adapt to after a minute or two of conversation.  Both phones offer really clear transmission quality.

We’ve already addressed the cost of owning these phones.  Only you can speak to your budget.  Generally speaking it will cost you less to maintain the IsatPhone Pro in an operable status while it collects dust sitting on the shelf in your home or office, where most handhelds hang out.