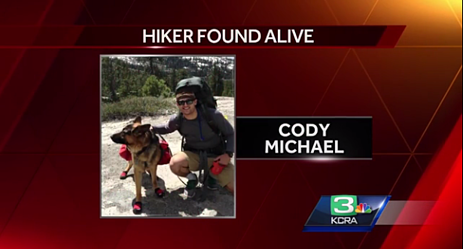 This Hiker was more hungry than hurt

Cody Michael, 23, and his German Shepherd, Bauer, were spotted about 10 a.m. on May 19th in Tahoe National Forest by a Black Hawk helicopter pilot and its crew.

“Words don’t describe it, emotions do,” Michael’s father, Howard, told KCRA. “(I) spent a good amount of time with him. It was an incredible father-son moment.”

In an unbelievable coincidence, Cody was found 72 hours to the minute after sending his last text to his family

I bet Cody wished he had brought his satellite phone.