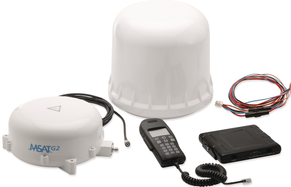 Without a doubt the MSAT G2 Dispatch capable satellite radio is the satellite terminal of choice when it comes to North American emergency response and crisis management. There are several reasons for that but the primary one is that DISPATCH RADIO WILL FUNCTION WHEN NOTHING ELSE DOES.

MSAT G2 Satellite Radioare down and cell phone towers are inoperable, Dispatch Radio via satellite will be there. The capacity of the satellite is such that its’ virtually impossible to overload it. The only negative, unfortunately MSAT will only work within the North American footprint. (see satellite footprint below)

The MSAT constellation was launched in the 1996. It consisted of two geosynchronous (high earth fixed orbit) satellites, MSAT 1 and MSAT 2. The constellation has been in continuous operation ever since. In 2011 MSAT launched Skyterra 1, its second generation satellite and, at the time, the most powerful commercial communication satellite in existence. Skyterra 1 has an estimated useful life of 20 years.

It’s important to note that construction of Skyterra 2, the sister satellite, has been completed. Skyterra 2 could be launched on short notice should the need arise. Also, both of the original satellites are still in orbit, still functional and could be brought back into service within hours should a problem arise with Skyterra 1.

If you are considering satellite communications for the purpose of providing communications redundancy for your operations, you should also consider satellite constellation redundancy…. and MSAT has it in spades. Also, given the instability in the world today, many of our MSAT customers find peace of mind knowing that MSAT is a joint venture solely between the United States and Canada, two governments with a very long history of being friends.

While a substantial part of our MSAT business deals with every day operational commercial use, an even MSAT G2 Satellite Footprintgreater segment of it supports emergency management and crises response capabilities. There are literally thousands of MSAT units in use throughout federal, state and local governments in both the US and Canada. The US Departments of Homeland Security, Justice and Transportation would be three of the largest federal agencies employing this service. We even have special Talk Groups established that can be utilized only by these agencies.
On the subject of cost…

The MSAT G2 radio can be configured for vehicular, terrestrial (fixed), marine installations and portable “go kit” use. All four configurations utilize the same “radio”. Variations include the length of the antenna cables (longer options available for building/fixed installations) as well as ruggedized antenna mounting brackets for the fixed version. The marine unit includes a 3 axis antenna.

There are also a variety of peripheral/3rd party products which are available. These are designed to facilitate specific “install” requirements. Two of the most widely used are:

– handset extenders which can be used to locate radio handsets as far as 3,000 feet from the actual radio itself. These are great for installations in large office buildings.
– as many as 50 different individuals can have access to a single MSAT radio via our PST/RST unit. This means that employees can access the MSAT Dispatch from their individual desks.