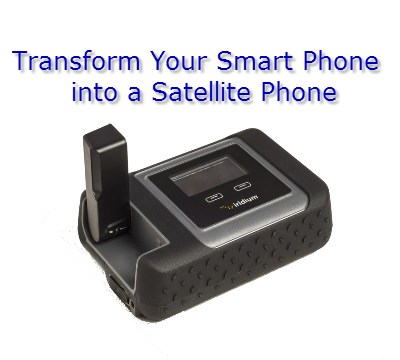 A satellite phone sends as well as receives calls by making use of satellites high above the earth, instead of broadcasting towers as in the case of cellular communication. Historically, people believed that satphones are reserved only for seamen, soldiers and those who go on exotic excursions, like Indiana Jones. In the past, the cost and size of handheld satellite phones have prevented this technology from having mass appeal. However today in 2014, all this has changed now as the cost and size of portable satellite devices have decreased significantly. Smart phones beware.

Smartphones may be everywhere, but if you happen to be in a place without any cell signal, communicating is impossible. However, Iridium’s new device solves this problem by transforming your smartphone into a Wi-Fi hotspot via satellite. Introducing The Iridium Go, a portable hotspot device that enables you to have access with the outside world, irrespective of where you are, at speeds of up to 2.4 kbps.

The device measures 4.5 x 3.25 x 1.25 inches and weighs 295 grams. When you’re in the middle of nowhere and want to place a call, get info on storm warnings, or check your email, all you have to do is open the Iridium Go app on your iOS or android tablet or smartphone, flip up the device’s integrated antenna and the connection immediately converts into a satellite transmission with a radius of approximately 100ft. The Iridium Go is very rugged and withstands harsh weather conditions and links up as many as five mobile devices simultaneously.

Small Enough to Fit in Your Pocket

The Go may not be designed for watching Netflix and uploading your Antarctica expedition on YouTube. However, the device will enable you to make a call no matter where you are, send as well as receive text messages and notify someone of your location coordinates . The Iridium GO supports a range of communication capabilities such as voice, email, social networking, photo sharing, two-way SMS, SOS alert and GPS tracking.

The Iridium Go is compatible with the upcoming satellite network, Iridium Next, which can boost its speeds and take it nearer to those that the modern 3G/4G networks provide. Pricing of the device is not yet clear, but shipping of the Iridium Go is scheduled to start within the first six months of 2014.